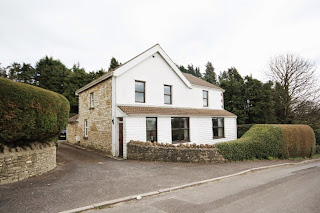 So - I've finally decided - it's time to move on. Quite a wrench as we have been here since 1984, but the house and garden are much too big for me to manage and I really don't need all this space since I lost Terry almost two years ago.

Where on earth I will find room for all my books and files in a much smaller home I can't imagine, though! I have SOOO much what I suppose could be called clutter, but which I can't really get rid of - when writing a book I will suddenly remember a reference that might be useful that I haven't looked at in more years than I care to remember.

Thirty-three years - where have they gone? I remember moving in so clearly. The house was Terry's dream, set on a hill with far reaching views across the valley. The extra space was wonderful for two fast-growing-up daughters. But to begin with I really missed our old house in Midsomer Norton. I missed being able to lie in bed and listen to the river tinkling over the stones at the bottom of our garden. I missed the three miniature apple trees and my row of sweet peas which I would sit beside and write in summer. Most of all I missed living on a modern estate surrounded by families all with children round about the same age as ours. It was wonderful - the houses on two parallel roads backed onto an access road with the garages and parking spaces, and if on a frosty morning someone's car wouldn't start men would emerge from all the houses and help push the offending vehicle until they got it going.

One day just before Christmas Terry seemed to be the only man around and he was unable to push Veronica's car fast enough to get going on his own. Now I had bought him some jump leads for Christmas, but I wanted them to be a surprise. So I ran put of my front door, round to my neighbour's explained the situation, and she took them out the back, telling Terry she had just found her husband Peter's jump leads. Problem solved. But we did have a laugh about it - Terry was using his own jump leads without knowing it!

Of course we have had some very happy times here. The big garden and the huge variety of walks within easy reach were ideal for our dogs. We've had wonderful parties and family get-togethers and both girls were married from here. But will I miss this house as much as I missed the old one? Somehow I don't think so. Lovely home though it has been, I still think the happiest times of my life were in that house in Riverside Walk.

Now I plan to move to Bristol, so as to be nearer to my two daughters. That too will be a wrench, but hey, it's time to look to the future!

I suspect this moving lark may well inspire a good few blogs along the way. Though I must admit I'm hoping to get through it without too many traumatic moments!!! I'll keep you posted!