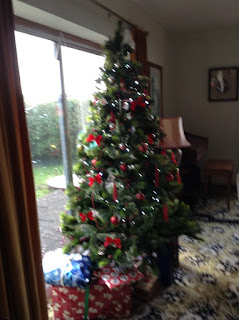 Oh, the memories that come flooding back when trimming the Christmas tree! It's an artificial one now, unlike the fresh real one we always had. I do love a tall tree, and last year I decided that while I could just about get a fresh one home if the man from the shop was kind enough to squash it into my car, I could do without the hassle of having to saw a bit off the bottom, keep it in a bucket of water for a day or two, and then get it up - something that caused problems even when Terry was here to help me. I would be struggling to hold it up straight while he tightened the retaining screws in the holder but invariably it would be a bit off kilter and an argument would ensue with him saying it was fine, and me saying it wasn't. When we eventually got it as straight as it would go, tempers would be frayed and my hands and arms covered in scratches from the needles.

Certainly my artificial tree is a good deal easier to put up, but what I hadn't reckoned with was how heavy it is! No way could I get it down from the attic myself, and even with my sister's help we had to take it out of the box and pass it down the loft ladder in three bits.

Trimming it however is just as much a pleasure as it always was. And the memories that come out of the boxes of decorations! You may remember a couple of years ago I posted pictures of some of the baubles I bought the first Christmas Terry and I were married - fifty years ago this coming year! They were made of glass and some have gone to the great bauble box in the sky but amazingly I still have quite a few. And some pretty little flowers on wires, and a dear little lady mouse made of straw or cane and dressed in a Santa outfit. At one time there was a little man mouse too - I don't know what happened to him. Like me, Mrs Christmas Mouse is now alone.

Then there is the crystal ballerina I bought for my granddaughter Tabitha when she was much, much younger, but already a committed dancer. And a satin heart given to her by the lady next door when we went to visit her.

Last but not least there is a pink plastic disc cut out like a stencil to show the nativity scene. It's the one remaining ornament I have from my own childhood days - I remember my mother buying it. In those days we didn't have fairy lights on the tree, but real candles that glowed through red shades - I dread to think what a fire hazard they must have been! But they were quite magical. And we had always been taken to the forestry plantation by my uncle - the only family member to have a car! - where we walked through the rows of trees to choose the one we wanted and they would then cut it down for us. That was what you called a fresh tree!

Oh, the wonder of those childhood Christmases! I've often drawn on them for my books. The Christmas meal wasn't in any way elaborate, but it was chicken - or rather cockerel - and that was an enormous treat as we only had chicken once a year. We watched the birds being fattened up by Mr Young the Fowl Man in their run across the road from where we lived, and when he delivered ours on Christmas Eve the kitchen would be full of the smell of singed feathers as the remaining stubs were burned off with a taper. And the smell of it on Christmas day ... nothing has ever tasted quite as good since! My sister and I hung up not stockings, but pillow cases - there was usually a jigsaw puzzle or an annual inside as well as the obligatory orange, apple and nut. And other presents were piled on the sofa in the living room and covered with a sheet so there could be no peeping until we all sat round in a circle to open them.

Oh I could go on and on .... but hey, I've still got things to do in preparation for this Christmas!

So once again - A MERRY CHRISTMAS EVERYONE - AND A VERY HAPPY NEW YEAR!