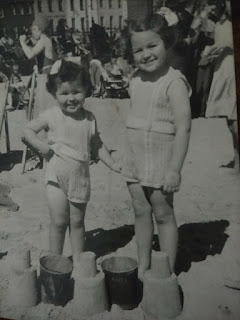 Myself and my sister on Weymouth beach (I'm the elder one) wearing our knitted sunsuits.

Holidays when we were children were very rare. Mostly we only saw the sea on a few day trips by coach or train to Weymouth or Weston-super Mare. These were great occasions, especially the coach trips organised by the Working Mens' Club or the RAOB - 'The Buffs' as we called them - both of which my father was a member. We would take packets of sandwiches wrapped in greaseproof paper, biscuits, and tomatoes to eat on the beach, so invariably we ended up with mouthfuls of sand. There was a Punch and Judy show at Weymouth that we always made a beeline for, as well as sand sculptures, and The Pool, later called The Lido, was always first port of call at Weston-Super-Mare, with the pier to follow. On the coach journey home, Dad would start a sing-song and everyone would join in, some popular songs of the day, some old favourites such as 'She'll Be Coming Round the Mountain When She Comes', 'My Bonnie Lies Over the Ocean', and 'You Are My Sunshine'. I can hear those rip-roaring choruses now!

We did have a few stay-away holidays though. The very first was when I was about five and my sister three. I recall being very excited when the letter came - by second post, early afternoon - confirming the booking for two weeks at Seaton in Devon. Mum, Dad, my sister and I were to stay in a holiday bungalow on the beach whilst my grandma - Gran - was in a hotel just a short walk away across the bay. Grampy never went on holiday. He was too fond of his home. Two whole weeks! It sounded like bliss! Unfortunately, it was an unmitigated disaster. From almost the moment we arrived it poured with rain, pretty well full stop. During breaks in the storms my sister and I were able to get in the sea, wearing spare vest, knickers and liberty bodice that had been packed especially to serve us as bathing suits. Dad would have come in with us - he was a strong swimmer, who, as I believe I have chronicled before, had once saved the life of a boy caught by the currents in Margate (or maybe Ramsgate, I can never remember which it was!) And he was almost certainly wearing the one-piece bathing suit he had relied on since the 1920s and which was later to cause me great embarrassment. Not on that holiday, though. For one thing I was too young to realise how outdated it was and for another there was, as I recall, no-one else to see. Our pebbly beach was quite deserted, understandably given the dreadful weather.

To make matters worse, the 'bungalow' had a tin roof which let in the rain. One of the biggest leaks was right over Mum and Dad's bed. And all our clothes were constantly damp. After a week of misery it was decided we had had enough and were going home. We caught a train which got into Radstock just before 9 pm. How do I know that? The clock on the market tower was striking as we left the station - nine o'clock! I'd never been up so late before. It remains the most memorable part of a most disappointing holiday!

Some years later there were week-long holidays in Barry (Glamorgan) and Weymouth. In Weymouth we were able to stay with a cousin and her family who lived there, and as far as I remember the weather was much kinder to us and we were able to get in the sea, make sandcastles on the beach, and of course watch the Punch and Judy show as many times as we liked. The first year in Barry we stayed with an old family friend, but not the second. Perhaps she baulked at our treading sand into her neat little house. Whatever, we stayed at a boarding house owned by a lady named Mrs Evans, who certainly did make it clear she would not appreciate footprints of sand. We had to wash our feet on the doorstep. We ate in her front room - full board - and had two bedrooms at our disposal with a chest of drawers in my sister's and mine, where we promptly made beds for our dolls, Anne and Helen. It was on this holiday that I first became aware that Dad was the only one in the swimming pool wearing a one-piece bathing costume. I remember being torn between wanting him to take me down the 'water chute' and not wanting to acknowledge that I belonged to this strangely attired man. Thank goodness Mum must have persuaded him to 'splash out' on a pair of trunks after that as I don't remember him ever wearing the one-piece again. Buying a new costume must have made a huge hole in my parents' very tight budget.

But I certainly remember mine and my sister's first bathing costumes ..! My auntie knitted them in yellow, trimmed with white - she was a great knitter - and very nice they looked too, until we got into the water. Then of course they absorbed gallons of it and ended up hanging down between our knees …

Oh, how these memories roll in as I write! Later, when we reached our early teens, there were caravan holidays in 'Rita Showering's caravan'. Rita, wife of one of the Showering brothers, famous for their Babycham, had been a friend of Mum's when they were young, and she let us have use of her static caravan. Naturally it was well equipped, with even an awning, and I thought we were the bees' knees to be there as the guest of such an important lady. Later still, came a holiday at Butlins, Minehead, and a week in Switzerland! Things had moved on from the days of our childhood. And it's time I moved on, too!

But rest assured, I shall be posting more blogs about my life as a child in the 40s!