Since we're now in December I thought I'd revisit my childhood Christmases for this instalment of my memories of growing up in the 1940s and 1950s.

They were wonderful, those Christmases. For weeks ahead we were forbidden to poke into 'Grandma's corner', a space in her bedroom between the wardrobe and wall, because that was where mysterious packages were stowed. In fact 'Grandma's corner' was out of bounds from early November and late January because both my birthday and my sister's fell during those months. And then the Great Day would approach! On Christmas Eve we'd sit around the dining table wrapping our presents for the rest of the family, and perhaps making yet more paper chains to decorate the house. The Christmas tree would already be up, with little candle lights in their holders - real candles, burning brightly - no 'elf and safety worries then! Hazel and I would both be watching the clock, eager for bedtime because in the morning ... it would be Christmas Day!

Once in my bedroom, though, I would find it hard to fall asleep, and would creep out of bed to look out of the window in the hope of catching sight of Father Christmas's sleigh zooming across the sky. Though I never saw him (of course!) I lived in hopes that this year I might be lucky. Then, if I woke in the night, I would crawl to the bottom of the bed and feel my pillow case to 'see if he'd been'. Yes, we hung pillowcases, not stockings, but since the presents we were left usually included a jigsaw puzzle and an annual, a stocking would hardly have accommodated them. And always, at the bottom, was an orange and an apple.

Our 'big presents' would be left on the settee in the living room, covered with an old sheet - probably the same one we used when we played 'hospitals' with our dolls. The sheet was never removed until after we'd had breakfast and cleared away, and the lumps and bumps beneath it were wonderfully tantalising. When the time came, my mother and father, Gran and the auntie with whom we shared a home, would make a circle of chairs in front of the fire, the sheet would be removed and the presents distributed. My Grampy never joined us for this ritual - he was always in the kitchen peeling the potatoes and sprouts for lunch, or dinner, as we called it.

Oh, those Christmas dinners! They weren't elaborate as today's are - just boiled potatoes, Brussel sprouts, homemade stuffing and cockerel, but the smell and taste was divine. Any sort of chicken was a once-a-year treat, and our cockerel had been raised in a chicken run in the allotments just across the road from our house by 'Mr Young The Fowl Man'. In the weeks before Christmas we'd wake to the sound of the cockerels crowing and know one would end up on our table. Mr Young delivered it on Christmas Eve and my aunt would then singe off the remains of the feathers with a taper. Not a nice smell, but exciting, and not nearly as bad as the smell back in the autumn from the Christmas puddings being boiled in the copper. That was a smell I detested - wet pudding cloth and the house filled with steam. I didn't even like Christmas pudding very much, and still don't, though I love brandy and rum butter!

Back to the Christmas presents. We weren't snowed under, as children are today. There was usually one 'big present', quite often shared by my sister and me. My aunt knew someone who made wooden toys, and I particularly remember the dolls' house - my dad fixed up real electric lights that ran off a battery - and a huge model roundabout. It was a work of art, but we never quite knew how to play with it. There was always a new pair of slippers each, and some books. And, a running joke, a present from an aunt who we rarely saw, but who invariably sent us something far too young for us. I especially remember one year when we were quite big we each got a 12-piece jigsaw - we had endless fun doing 'speed contests' to see who could finish fastest. Her presents to the rest of the family were not received with much more enthusiasm - she invariably gave my mother an apron or a peg bag purchased at their church bazaar. And one year my mother's other brother, to whom we were very close, received the very same shaving bowl he had given to his brother the previous Christmas ... There were also the calendars - a picture pasted on an A8 sized piece of card with a booklet of tiny pages, one for each month. No space for writing in endless appointments then! But an empty space on the wall without one.

The present I'll never forget came when I was eleven. I had passed my 11-plus (though only 10 at the time I took it) and started at the local Grammar School that September. Until Christmas I had travelled on the bus, but really needed - and wanted! - a bicycle. I will never, ever, forget coming downstairs on Christmas morning and there, in the hall, covered with the inevitable sheet, was a bicycle shaped object. I was so happy I was practically in tears - I remember very vividly the excitement fluttering in my stomach. It was perfect. A red Hercules. My parents were paying for it in monthly instalments - long afterwards I came across the repayment book. I dread to think what they had to sacrifice to buy me that bicycle! Dad had to take me around the lanes, hanging onto the saddle, to teach me to ride it, but then there was no stopping me. That bike was my pride and joy. In fact, I only found the will to get rid of it when I moved here, two and a half years ago. Before that it hung in the garage wherever we moved, getting steadily rustier, and still I couldn't bring myself to consign it to the dump. It was still so special to me.

Christmas past. Carols and cockerel, paper chains, and presents tied with string - no sellotape then! The memories make me nostalgic and a bit sad - today we all go mad with endless preparations to make 'the perfect Christmas' - elaborate food, oceans of alcohol, flamboyant decorations, expensive presents - far too many, in my opinion - especially for the children. As they hastily tear the wrapping paper from one parcel after another do they really appreciate what they have received half as much as we did with our two or three presents (including the inevitable, boring slippers!)? But I am grateful I can share the celebrations with my wonderful family - and that I have such wonderful memories of simpler times. 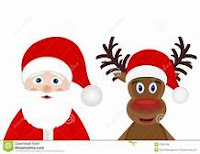