I WAS A REAL LIFE 'HEARTBEAT' WIFE
PART ONE - ROMANCE ON THE POLICE STATION LAWN
When I see episodes of the sixties police drama HEARTBEAT I become very nostalgic indeed, and not just for the musical memories the soundtrack evokes.  It's the whole thing - the village police house with the blue light over the door, the uniforms, the cars, the motor cycles, even the story lines, though I have to admit some of them in later episodes did become a bit far-fetched.  Because I was there, a police wife who lived in a country station during the late 'sixties and early 'seventies, where people knocked the door for assistance at all hours of the day and night, and my husband, Terry, covered his rural beat on a motor cycle.   Not with an overcoat flying out behind him, he would be at pains to point out - he actually had some very nice leathers - but on the whole HEARTBEAT really conjured up life in the police force as it was in those days.  And what a life it was!  In future posts, I hope to share with you some of the episodes I experienced - the hilariously funny, the tragic, the really very scary.  But for now I'll tell you how it all began.
Life as a police wife didn't come as much of a shock to me - I'd been working for the police at our local Divisional HQ for several years before I met Terry.  To begin with I was a secretary with special responsibility for looking after all the officers in our Division, keeping their records up to date (in a ledger - no computers in those days!), and arranging for their police houses and stations to be kept in good order - redecoration, emptying of septic tanks, repairs to burst pipes, all this and more fell to me.   Later, when one of the constables in my office was moved back to the beat, I took on his duties and became what was known as Accident Queen, dealing with all the paperwork that arose from road traffic accidents.  Sometimes I even took 999 calls.   Locating an officer to deal with them wasn't always easy.  There were no personal radios back then, if there was no-one in the station to attend we had to either call a traffic car or wait for an officer to 'make a point' which they did regularly from telephone kiosks.  I loved the work, I loved the life.  It was exciting as well as interesting and the policemen were, for the most part, enormous fun.  I was taught the principles of Advanced Motoring by the traffic crews, got to meet the police dogs, and never knew what the day would bring.
Then one day a new policeman was posted to our station.  That policeman was Terry.
The funny thing was, I spotted his car before I ever set eyes on him.  He always says it was his car I fell in love with, and his fate was sealed from the moment I saw it.   And that isn't far from the truth.  I looked out of our office window and saw it in the station car park, a smart, sporty Triumph Vitesse, just like the one pictured below.   'Who does that belong to?'  I asked.  And one of my colleagues replied: 'The new policeman, who's just been posted here from Weston-Super-Mare.'

The 'new policeman' was on 'earlies' - 6 am-2 pm; my friend Brenda, who worked in CID, and who I usually had lunch with, was on holiday, and so, instead of playing a game of table tennis or skittles with her, and eating together in the recreation room, I took my sandwiches and a book outside.  It was a warm August day; I sat on the lawn reading, and, truth to tell, waiting.  Sure enough, just before 2 pm Terry and his tutor constable returned from patrolling the town, and made some comment about me sunbathing.  He offered me the use of his lawn for the purpose, I think.  They went inside, then, a few moments later Terry was back - on the pretext of getting his gloves from his car, he said.  He began talking to me, asked me out ... and the rest is history.  We were engaged at Christmas and married the following September, on what was my father's birthday and what would become the birthday of our younger daughter, Suzanne.
And so I became a police wife.  A whole new adventure that I hope to share with you .....from the night our landlady locked him out and he had to sleep in the cells to the time when our country station was besieged by Hells Angels seeking revenge ...  from the lady who thought the Martians had landed on the school playing fields and were burning her in her bed with lasers to the one who tried to enveigle me into the local wife-swapping circle.  But they are stories for another time. 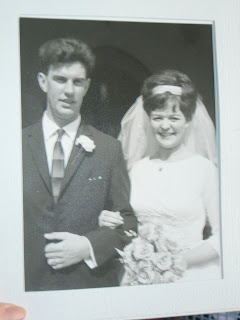