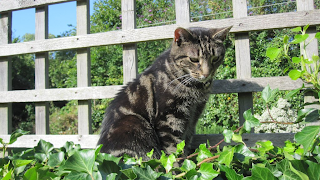 I've just spent a week cat-sitting for my daughter and her family whilst they have been in France, skiing.  Now I'm a dog person, always have been.  We've had three German Shepherds, a Goldie, a yellow Labrador, our dear Italian dog Millie, who we sadly lost a couple of weeks ago, and as a teenager my family had a sweet little Heinz 57 who was uncannily like Millie both in looks and temperament. We've also had an amazing house-trained rabbit, a cockatiel who actually belonged to my daughter but ended up living with us, a budgerigar inherited from my mother, and several hamsters.  But I've never had a cat, though Terry and I did make quite a pet of one who was the mouser for the shop over which we lived in a rented flat in the first months of married life.  I've always shied away from getting one of our own, for all sorts of reasons - not least that I like to know where my pets are when I go to bed at night, and wouldn't sleep easy if one of them was out roaming heaven-knows-where.
But Jacob is a joy!  Suzie, my daughter, rescued him from the RSPCA home last summer, a pretty little tabby with only half a tail - he had been involved in an accident when he was brought in to the home, and had to have the damaged part amputated.  He is also the friendliest little chap, who rarely goes out of the garden and spends most of his time lying on the patio in summer and on the back of a chair from where he can look out of the window at this time of year.  And for the whole of the week, he followed me around like a shadow.
I'd intended to make the most of a week with no interruptions to do lots of work, and I did manage that - with difficulty!  Every time I sat down to write, Jacob was there, clambering onto my lap or the computer keyboard, or settling himself down to lie on my writing pad and pile of paper.  And does that cat talk!  I never knew what a variety of 'miaow's there are in a cat's vocabulary!  Loud and insistent when he wants attention or to be fed, soft and purring when he's contented, and all stations in between.  At night he'd come into my room, jump up on the bed and begin prodding my nose with his paw, then settle into a hollow and lie for a while padding at me rhythmically before falling asleep.  If he wasn't still in my room in the morning, he'd appear, mewing, at the first sound of my feet on the floorboards.
He can be a bit naughty - one day, eating lunch in the kitchen, I thought I saw him on the other side of the frosted glass of the back door.  Wondering how he had come to go out without me seeing him, and also why he didn't just come in by the cat-flap, I got up and went to open the door, just in time to see puss streak away down the lawn and over the fence into a neighbouring garden.  I followed - as I said earlier, I like to know where my charge is! - but puss had completely disappeared.  Resigned, I returned to the house, only to find Jacob toying delicately with a slice of the ham from my plate!  The cat I'd seen wasn't him at all - but he certainly took advantage of my absence to make off with a tasty snack!  He also ran off with the very expensive piece of digital engineering that is my hearing aid, which I'd put on the dining room table.  Luckily that happened on the first day when Terry, my husband was there - he saw what Jacob was up to, chased him and recovered it unharmed.  Thank goodness!  If he hadn't witnessed the theft I doubt I would ever have found my hearing aid - unless I'd heard it whistling inside Jacob's tummy!
I left him yesterday evening after feeding him with a double portion of Whiskas and felt bereft as I drove away.  Suzie and family were due home in just a few hours and I told myself he'd be fine.  Which, of course, he was.  But I'm left missing him dreadfully.
A dog person I might be, but that little cat has certainly found his way into my heart and filled a corner of the chasm that dear Millie has left.
Posted by Amelia Carr at 03:58